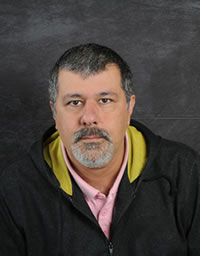 Carlo Luzi is an Italian guitarist born in Rome. Computer programmer, lover of ambient, experimental and electronic music, he started to play instrumental music in 1980 and founded the group "Terra della Sera" with Paolo
de Gregori (Adam Kozmyk), producing several projects released on LP in Germany, but which were not widely available.

In 2008 he formed the project "SeraSidereA", again with Paolo de Gregori and with the participation of soprano Daniela Massi releasing the album "Aestetica Tenebrarum". In 2008 Carlo also released "Sirens" under the alias
Acheloo and this was signed by AD Music who also signed the follow-up "Ishtar".

Acheloo has a unique approach to ambient music, combining electronics and guitar to stunning effect. Beautifully produced and with a deep emotional content, the music washes over the listener like gentle waves while bathing in a sea of tranquility. To quote independent reviews: "The music is a wonderful example of cosmic, ambient music in the tradition of, say, Dreamtime by Steve Roach. Beautiful drifting soundscapes that weave between beauty, warm cosmic spaces and a sense of emptiness and danger that also call to mind the early soundscapes of Tangerine Dream".

However, it is Carlo's excellent guitar work that gives this extraordinary ambient music it's edge and the superb musical soundscapes walk the thin line between the creative genius of new music and genuinely superb creative atmospheric music without ever allowing the listeners attention to wander